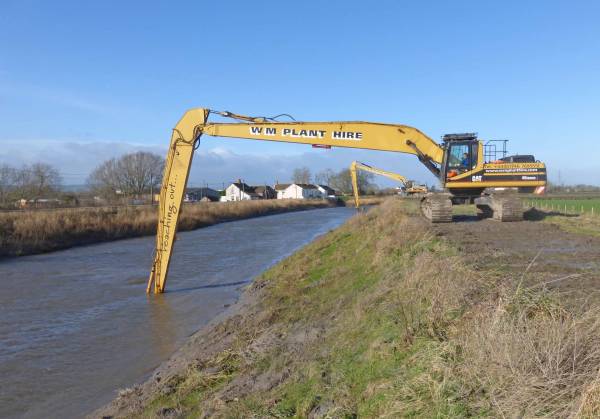 The work on the River Parrett followed on from previous dredging on the Parrett and Tone Rivers in 2014 which was identified as producing the biggest flood reduction risk on the Somerset Levels and Moors.

The dredging taking place on the main river, required a special agreement between the Environment Agency and Parrett IDB for them to work using the Agency's powers.

The contract was for 2.2km of maintenance dredging upstream of Northmoor pumping station, with various access constraints needing to be considered.

The dredging was undertaken in two main phases.  With the variety of access issues a wide range of long reach excavators were provided udring the project with a maximum reach over 22 metres. Silt was spread on adjacent fields with the agreement of local landowners.

During phase 1 the larger long reach 17.5m to 22m were used to dredge from the bank.  Maintaining good relationships with the land owners during this phase was key to ensuring the job went smoothly, as ultimately they were the main people affected by the works.

For phase 2 a floating pontoon with a 19 tonne, 14 metre long reach excavator was used to load hopper barges moved by a tug boat and offloaded upstream.  The silt was then moved under license to deployment field.

Despite challenges from the weather over the winter period including: periods of heavy rain with high water levels, stong winds hindering the mobilisation and movement of floating plant, together with high river flows, the works were completed successfully.

This determination together with hard work of the team meant that over 20,000m3 of silt was removed from the river.

The project attracted a great deal of local interest, with visits from BBC radio and television, interviews with key stakeholders and featuring on BBC's Countryfile TV programme.